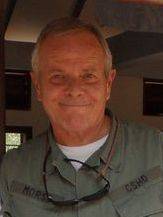 Bill Morse and his wife Jill lived in Palm Springs, California for over 20 years. Bill was a commissioned officer in the US Army, taught school, and ran his own business from 1980 to 2007 when he shut it down to concentrate on clearing mines in low priority villages in Cambodia.

In 2003 he heard of an ex-Khmer Rouge soldier, Aki Ra, whose quixotic mission was clearing landmines by hand. He and Jill traveled to Siem Reap, Cambodia to find Aki Ra and learn more about his work. After meeting him, he returned to the US and started the Landmine Relief Fund, a 501c3 charity, headquartered in Palm Springs, California to help support Aki Ra’s work.

He traveled to Cambodia regularly to work with Aki Ra who had also adopted over 2 dozen maimed and orphaned children, raising them alongside his own kids.

In 2006, Aki Ra was ordered to close his Museum and cease his unauthorized, guerilla demining. Aki Ra asked Bill to assist him in establishing a new, all-Cambodian NGO (non-governmental organization) to help clear some of the millions of landmines and unexploded bombs that still litter the country and have wounded 1 in every 250 citizens. They thought it would take 3 months. Bill stayed for nearly a year and a half. When CSHD received their license, Bill closed his business to work full time with Aki Ra.

Cambodian Self Help Demining (CSHD) became certified in 2008. In 2009, Bill and Jill moved to Cambodia to continue the work they find so rewarding.

Jill was a banker turned teacher in the United States when her husband Bill heard of Aki Ra. She decided that she could teach anywhere and then moved to Cambodia along with Bill in 2009. Jill teaches English at the Museum school and runs its volunteer program.

Use Giving Assistant to save money and support Landmine Relief Fund

Use Giving Assistant free to support Landmine Relief Fund while you shop. Find out more.